Mythic Yoga: Two Birds: A Story from the Rig Veda

Posted by Sydney Solis at 8:52 AM No comments:

Mythic Yoga: The Story in The Body

Mythic Yoga: The Story in the Body on YouTube! Subscribe to my channel! Have a watch and discover the story in your body! Also join me on Mythic Yoga Journey to Japan!
Posted by Sydney Solis at 8:44 AM 1 comment: 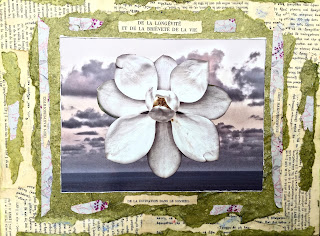 Please join me in lovely Tavares, Florida to view my mixed media and photo collage pieces, "Resurrection," from my Personal Mythology Series at the Opening Artist’s Reception with Featured Artists Kate Esplen, Kace Montgomery, Sydney Solis, & David Tear.
A 44-piece collection of visual beauty! I will also be reading the poem, "Strangers," as part of the collection. Exhibited until May 29, 2018Stroll by to meet the artists, listen to live music, and enjoy light, tasty hors d'oeuvres.

All of the pieces in this show contain something that has been pulled from the trash.  I have given them new life as works of art. Out of death comes life. A resurrection. For all my life I have collected ephemera, paper, the old or worn, thrown away holding history until images and textures could be salvaged and recast into something else as expressive art telling its own story.

The Rusty Warren album in “Sinsational” and frame was pulled from the trash back of Smitty’s Thrift store in DeLand, Florida, as were the frames for “Wonderful Florida” and “Voice of a Star.” They live on!

“Stetson Girls” is made from original antique silver gelatin prints from a Stetson University scrapbook that the West Volusia Historical Society was throwing away, but was passed on to a neighbor, who passed it on to me. An anonymous young woman’s college life story is immortalized.

Dozens of antique cards that a beloved teacher named Miss Olive Gardener of DeLand had received were, too, saved from the trash by my neighbor. Love and happy feelings never die in “Miss Olive Gardener’s Cards.”
“Paper Doll VI” and “Paper Doll V” contain items my late mother bought at flea markets or pulled from the trash herself, and I gleaned from her packed home upon her passing away. There we find the source of all my irresistible artistic itches to create. Out of death comes life.

Posted by Sydney Solis at 7:03 AM No comments:

Namaste.  Travel to and enjoy the amazing intensity of Osaka, Japan featured in Mythic Yoga Journey™ Haiku #3 video poem.
Meditate upon the clear light of being shining through all of reality.

Imagine yourself as a Buddha and let the city wake you up! Subscribe!
Posted by Sydney Solis at 5:16 PM No comments:

Nazis stole the Swastika: Now We're Taking it Back for Luck, Peace and Well-Being


“The soul speaks in an image,” Aristotle said. The voiceless language of symbols speak to our psyches and awaken powers, like good luck, good health and well being.

That’s the meaning of the swastika, which for thousands of years before Nazis and Eurocentric World War II history stole the symbol from Hinduism, Buddhism and Jainism. Native American tribes, like the Navajo, used the swastika in healing rituals. In European history, the symbol was associated with Norse gods like Thor and Odin. The swastika is also the pattern made from the revolution of the stars of Ursa Major around Polaris.

In Japan the swastika is called the manji (卍) and it was on maps in Japan to denote Shinto and Buddhist shrines and temples. I remember seeing it on Google maps the first time I visited Japan in November, 2016, and marveled at the impression this symbol made on my psyche. And it had nothing to do with Nazis, but the power of activating the powerful seeds of healing and auspiciousness within me.

Japan, however, decided to change the swastika to pagodas or torii gates in preparation for the for the 2019 Rugby World Cup and the 2020 Tokyo Olympics. The changes will not apply to Japanese-language maps, and there is no suggestion that the temples themselves should remove manji from their premises. But it just doesn’t have the same effect, and we are all losing something within ourselves as a result, such as access to our inner lives via the mythic dimension that our psyches (psyche means soul in Greek) need and crave in these troubled times.

Around Japan I have seen dozens of temples and shrines with the swastika. Nazi versions face right and usually sit in a diamond shape at a slant, while the manji version is a square. Japanese Buddhism has both a right-facing and left-facing manji. So think left swastika L for luck and love and R for Reich on its side for Nazi differentiation.

But the Nazi symbolism of the West has usurped the power of the symbol in the East in the last 70 plus years, especially in the United States, making this symbol inaccessible to many. It’s time to take it back and educate people about this symbol’s origins and true meaning, because humanity depends on it. As human beings, our psyches need something beyond just shopping and working. It needs ritual, myth and participation in the cosmos, otherwise, as Mythologist Joseph Campbell says, society disintegrates. And it is! Just read the headlines!

“Mircea Eliade was motivated at all times by a deep concern for the future of Western civilization, which he saw as threatened by possible extinction,” writes Robert Temple.

“He believed it essential that we recognize and acknowledge the archaic and the Eastern contributions to man's spiritual history while there is still time to do so with good grace. Otherwise, by maintaining an attitude of contempt or superiority towards the rest of the world — past and present — we would bring disaster on ourselves and the world as a whole.”

So contemplate the swastika. Notice the tension of opposites from the Nazi symbolism that has embedded itself today and with the rise of hatred and chaos in the United States and Charlottesville, Virginia as the West declines and the East rises with its ancient connotations of health, well-being and peace in the East.  See where those two meet. One thing passes away, the other arises. What has been suppressed, comes into consciousness once again.

Experience the symbol in your body, your art, your meditation, your dreams and see what happens.
And may peace, luck and good health be with you!

More pictures of Swastikas in Japan on my blog, Sydney in Osaka! Subscribe!


Posted by Sydney Solis at 9:13 PM No comments:

Mythic Yoga was created out of my own personal practice. I am proof that when you follow your dream images and discover your myth by reflecting on your personal story and following your bliss, magic happens. Healing happens. Doors open only for you.

This has been my experience, as I remarkably find myself living in Osaka, Japan with my new husband. It's a rebirth for sure, as my 84-year-old father died June 24, the day I moved to Japan. I went back a week later for bereavement. To clean out the old and rebirth the new.

My father, my past life in Colorado and childhood home in Boulder, Colorado - so much was left behind, but all was brought with me too. I pulled the choice memories and good from the ashes of the past.

I have been asked to put on an online Mythic Yoga training. Join me next week Starting Monday July 17 for 4-weeks exploring your personal mythology via yoga philosophy, mythology, art, writing, yoga asana and more.

Know Thy Self! Use dreams, myth, the body and personal storytelling for self-discovery and transformation!

Each class features movement, yoga, contemplation and a different ancient Hindu and myth that leads you through life's stages Bring a dream you’ve had and would like to work with, a notebook, your body and your listening ears to journey within and discover your personal myth. Includes all materials.

Register by purchasing the downloadable Mythic Yoga materials online.  Cost is $199.  Enroll by July 13 and receive 25 percent discount with this code MythicYoga at checkout.

Mythic Yoga: The Story in the Body - Personal Mythology & Transformation via Body and Story

Pictures are images that bubble up from the soul. Putting together images for this movie guides you to begin to listen to the story in the body as you take a Mythic Yoga Journey™ into your own story. Use svadyaya, self-reflection, to contemplate the images while you practice yoga. The classic method of Mythic Yoga by Sydney Solis. Subscribe!
Posted by Sydney Solis at 9:22 AM 1 comment: