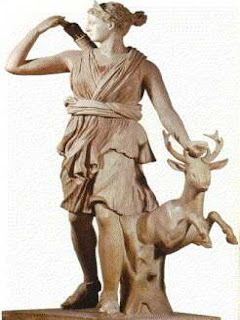 Mythic Yoga enters a new phase. The Queen of Bohemia has taken up her abode in The Little Lotus at the Mythic Yoga Studio on PowHow with Storytime Yoga to entertain, enchant and educate young minds and bodies.

Now that her l'il yogi kids have blossomed into young adults, it's time to return to Mythic Yoga: The Artemis Club - Stories and Yoga for Young Women at Teen Yogini.com.  Nurturing, protecting and empowering the young feminine is needed in this day and age to bring the mother goddess back to the world. Something sorely needed for the earth and our own psyches.

This marks the return of Mythic Yoga, which I started 10 years ago. Nobody could really understand "Mythic Yoga" back then. Storytime Yoga was hot for kids yoga, and my kids were young. So I focused on that and continued Mythic Yoga as the personal practice program for parents and teachers in the Storytime Yoga Teacher Certification. Back then the kids really needed me, I took the time off to be a mother and raise them. 10 years later, my dharma fills me with kama  to move me to artha to achieve moksha! So Mythic Yoga forces its way up to top because it's ready to come up out of the dark!

Artemis commands in her character for us to pay attention to the Young Feminine and protect it  In The Fisher King and the Handless Maiden: Understanding the Wounded Feeling Function in Masculine and Feminine Psychology Robert A. Johnson argues that the feeling function is the most wounded in our society. Attention must be paid to our young adults to nurture their feeling function in order to avoid the destruction that is upon us with mass shootings, eating disorders and general misogyny in the world and the destruction of the Earth.

The Myth of Artemis is powerful to contemplate in the body. A true feminist archetype, Artemis infuses us with the energy of the mother goddess permeating the body, acquiring masculine energy to balance out a badly out of balance world tilted to extreme masculine and mechanical machine, suppressing the feminine and the body, the earth. But the Goddess is back. And the masculine is coming through for women and young women to claim.

I've been having dreams of the "Dark Man," which terrified me. I read in Once Upon a Midlife: Classic Stories and Mythic Tales to Illuminate the Middle Years by Allan Chinen, M.D. about a woman embracing her  animus in the Chinese story The Wife who Became King.

Although frightening and threatening at first, the male villains ultimately help the wife individuate. The men represent the essential enemy. The same theme appears in other middle ages, and crops up frequently in real life. Many women reclaim their power only when they are forced to leave a neglectful or abusive spouse. Finally abandoning the hope that a man can fulfill their needs, women strike out on their own and discover dormant strengths and talents.

Jung suggested that the animus usually plays the role of a helpful, spiritual guide for women, leading them on a voyage of self-discovery. Dangerous animus figures reflect the realities of patriarchal cultures, where men often attack women….. Because of social pressures, women are also taught to fear being assertive. Since the animus symbolizes assertiveness, he appears threatening at first. Pg. 103.

After recognizing my animus appearing in my dreams, my own masculine energy, I befriended him. He appears regularly now in my dreams, recently taking me into a new house, upstairs to a room with a great view! We can all befriend our inner masculine for union and wholeness!

Visit Mythic Yoga: The Artemis Club invite the young women in your life to join you in the mythic journey to your Self. Learn to use the archetypical energy of Artemis to reclaim your masculine, animus power in your life. Challenge the alienation of mundane life and re-mythologize it. Participate in the myth with Mythic Yoga and do your part in bringing light to the world and bring the Great Mother energy to the world for healing, life and rebirth.